Insight into causes and treatments for tinnitus

• How is tinnitus treated?

• What can help me cope?

Nearly 36 million Americans suffer from tinnitus or head noises. It may be an intermittent sound or an annoying continuous sound in one or both ears. Its pitch can go from a low roar to a high squeal or whine. Prior to any treatment, it is important to undergo a thorough examination and evaluation by your otolaryngologist and audiologist. An essential part of the treatment will be your understanding of tinnitus and its causes.

Tinnitus is commonly defined as the subjective perception of sound by an individual, in the absence of external sounds. Tinnitus is not a disease in itself but a common symptom, and because it involves the perception of sound or sounds, it is commonly associated with the hearing system. In fact, various parts of the hearing system, including the inner ear, are often responsible for this symptom. At times, it is relatively easy to associate the symptom of tinnitus with specific problems affecting the hearing system; at other times, the connection is less clear.

Most of the time, the tinnitus is subjective—that is, the internal sounds can be heard only by the individual. Occasionally, tinnitus is “objective,” meaning that the examiner can actually listen in with a stethoscope or an ear tube and hear the sounds the patient hears. Tinnitus may be caused by different parts of the hearing system. At times, for instance, it may be caused by excessive ear wax, especially if the wax touches the ear drum, causing pressure and changing how the ear drum vibrates. Other times, loose hair from the ear canal may come in contact with the ear drum and cause tinnitus.

One of the preventable causes of inner ear tinnitus is excessive noise exposure. In some instances of noise exposure, tinnitus is the first symptom before hearing loss develops, so it should be considered a warning sign and an indication of the need for hearing protection in noisy environments. Certain common medications can also damage inner ear hair cells and cause tinnitus. These include non-prescription medications such as aspirin, one of the most common and best known medications that can cause tinnitus and eventual hearing loss. As we age, the incidence of tinnitus increases. Hearing loss associated with aging (also known as presbycusis) typically involves loss of and damage to the hair cells.
A special category is tinnitus that sounds like one’s heartbeat or pulse, also known as pulsatile tinnitus. At times, the presence of pulsatile tinnitus may signal the presence of a vascular tumor in the general vicinity of the middle and inner ear. When noting this type of tinnitus, it is advisable to consult a physician as soon as possible to rule out the presence of this type of vascular tumor.

Conditions that affect the hearing nerve can also cause tinnitus, the most common being benign tumors, typically originating from one of the balance nerves in close proximity to the hearing nerve. These are commonly referred to as acoustic neuroma or vestibular schwannoma. Tinnitus caused by an acoustic neuroma is usually unilateral and may or may not be accompanied initially by a hearing loss.

Tinnitus may also originate from lesions on or in the vicinity of the hearing portion of the brain, called the auditory cortex. These can be traumatic injuries with or without skull fracture, as well as whiplash-type injuries common in automobile accidents. Benign tumors known as meningiomas that originate from the tissue that protects the brain may also be a cause for tinnitus that originates from the brain.

There are a number of non-auditory conditions that can cause tinnitus, as well as lifestyle factors. Hypertension or high blood pressure, thyroid problems, and chronic brain syndromes can all cause tinnitus without any specific auditory problems. Stress and fatigue may cause tinnitus, or can contribute to an exacerbation of an existing case. Poor diet and lack of exercise that may cause blood vessel and heart problems may also either cause it or exacerbate an existing condition. It is also possible that tinnitus could be caused by food or beverage allergies, but these causes are not well documented and are difficult to sort out.

How is tinnitus treated?

In most cases, there is no specific, tried-and-true treatment for ear and head noise. If an otolaryngologist finds a specific cause for your tinnitus, he or she may be able to offer specific treatment to eliminate the noise. This determination may require extensive testing, including x-rays and other imaging studies, audiological tests, tests of balance function, and other laboratory work. However, most of the time, other than linking the presence of tinnitus to sensory hearing loss, specific causes are very difficult to identify. Although there is no specific medication for tinnitus, occasionally medications may be tried and some may help to reduce the noise.

What are some other tinnitus treatment options?

• Alternative treatments, such as mindful meditation

Can other people hear the noise in my ears?

Not usually, but sometimes they are able to hear a certain type of tinnitus (typically the pulsatile tinnitus mentioned earlier). This is called “objective tinnitus,” and it is caused either by abnormalities in blood vessels around the outside of the ear, or by muscle spasms, which may sound like clicks or crackling inside the middle ear.

Can children be at risk for tinnitus?

It is relatively rare but not unheard of for patients under 18 years old to have tinnitus as a primary complaint. However, it is possible that tinnitus in children is significantly under-reported, in part because young children may not be able to express this complaint. Also, in children with congenital sensorineural hearing loss that may be accompanied by tinnitus, this symptom may be unnoticed because it is something that is constant in their lives. In fact, they may habituate to it; the brain may learn to ignore this internal sound. In pre-teens and teens, the highest risk for developing tinnitus is associated with exposure to high intensity sounds, specifically listening to music. In particular, virtually all teenagers use personal MP3 devices and nearly all hand-held electronic games are equipped with ear buds. It is difficult for a parent to monitor the level of sound children are exposed to. Therefore, the best and most effective mode of prevention of tinnitus in children is proper education relative to excessive sound exposure, as well as monitoring by parents or other caregivers.

Tips to lessen the severity of tinnitus

• Get your blood pressure checked. If it is high, get your doctor’s help to control it.

• Avoid stimulants such as coffee, tea, cola, and tobacco.

• Exercise daily to improve your circulation.

• Get adequate rest and avoid fatigue.

• Stop worrying about the noise. Recognize your head noise as an annoyance and learn to ignore it as much as possible. It is part of you.

What can help me cope?

Concentration and relaxation exercises can help to control muscle groups and circulation throughout the body. The increased relaxation and circulation achieved by these exercises can reduce the intensity of tinnitus in some patients.
Masking a head noise with a competing sound at a constant low level, such as a ticking clock or radio static (white noise), may make it less noticeable. Tinnitus is usually more bothersome in quiet surroundings. Products that generate white noise are available through catalogs and specialty stores.

Hearing aids may reduce head noise while you are wearing them and sometimes cause the noise to go away temporarily. If you have a hearing loss, it is important not to set the hearing aid at excessively loud levels, as this can worsen the tinnitus in some cases. However, a thorough trial before purchase of a hearing aid is advisable if your primary purpose is the relief of tinnitus.

Tinnitus maskers can be combined within hearing aids. They emit a competitive but pleasant sound that can distract you from head noise. Some people find that a tinnitus masker may even suppress the head noise for several hours after it is used, but this is not true for all users. 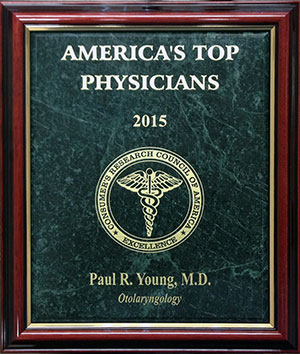